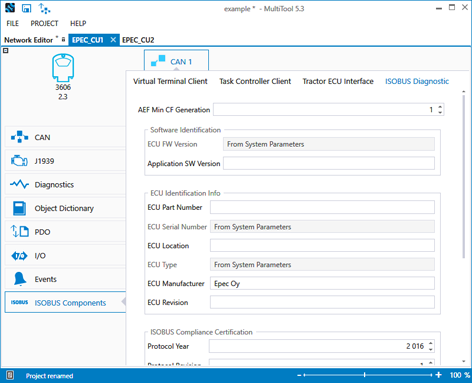 The Agricultural Industry Electronics Foundation – AEF – is an independent international organization which focuses on the use of electronic and electrical systems in farming. Due to the increased use of programmable electronics and information systems, the scope of AEF has become extensive. Today, AEF projects include, for example, the development of ISOBUS control systems, Farm Management Information Systems (FMIS), wireless in-field communication systems and electric drives for agricultural machinery.

Nowadays, AEF is responsible for ISOBUS technology development and its standardization to maintain ISO 11783 series standards. Seamless interoperability of machines from different manufacturers has been the target since the AEF was founded in 2008. Therefore, the AEF organizes AEF Plugfests twice a year to establish a platform for plug-in compatibility tests between the members.

This August, Epec joined the AEF to participate in the on-going research and standardization of ISOBUS systems. As a new member, Epec participated in the AEF Plugfest in September in Bologna, to test the compatibility of Epec ISOBUS solutions with other products in the market.