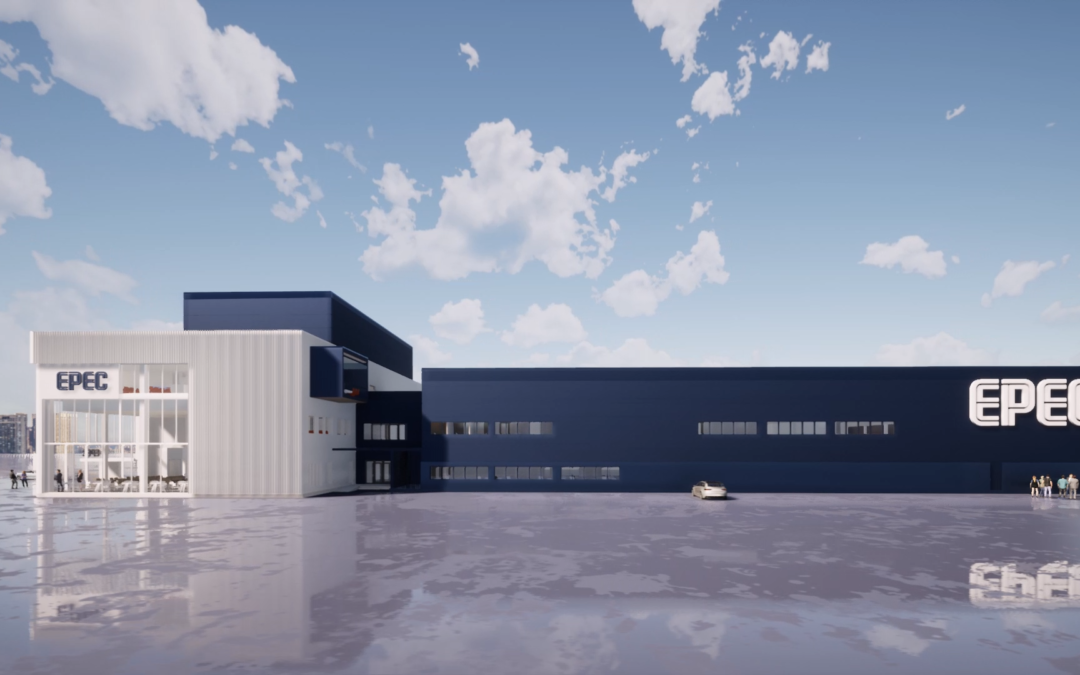 Finnish technology company Epec is building a new smart and sustainable factory in Seinäjoki, Finland. ESF1 (Epec Smart Factory 1) will include a three-story office space and a total of 8,500 m2 of factory space. Epec’s headquarters with its R&D, engineering, support and production functions will move to new premises from its current premises on the Seinäjoki campus. In addition to Seinäjoki, the company also has offices in Tampere, Turku and Kuopio in Finland, and Shanghai in China. The construction of ESF1 started in spring 2022 and the new facilities will be operational towards the end of 2023.

“The investment is significant for Epec, enabling the strong growth we are currently experiencing,” says Jyri Kylä-Kaila, Managing Director of Epec. “Digitalisation and electrification are rapidly increasing their share of the non-road machinery and commercial vehicle sector, which has opened up new and expanding markets for Epec. With a state-of-the-art factory, we are able to meet growing demand and increasingly stringent customer requirements, for example in terms of manufacturing processes. The Western Finland region has a technology cluster that supports operations, and the Seinäjoki centre of growth provides a good framework for growing operations.”

Epec is fully committed to promoting sustainable development, energy efficiency and reducing its carbon footprint. The factory project is a prime example of this: ESF1 will aim for carbon neutrality during its use and will employ sustainable manufacturing processes. 800 solar panels will be installed on the roof of the factory to generate electricity, the common areas will be heated by a geothermal system, the heat generated by the factory will be recovered by efficient needle heat exchangers, and the need for cooling energy will be significantly reduced by an aluminium grille on the office wall. All electricity and heating energy is sourced from renewable resources.

“The productivity of the factory has been maximised by simulating and optimising the production and material flows, exploiting the opportunities offered by digitalisation and waste energy,” says Eeva Koskela, Supply Chain Director at Epec, who is leading the project. “In practice, digitalisation in this case means a high level of automation, data utilisation, robotics and intelligent building automation. Particular attention has also been paid to safety and comfort at work. Overall, the testing and production technology is state-of-the-art. The new and modern production facilities provide Epec with excellent opportunities to further develop and grow our operations, expand our product portfolio and increase our manufacturing capacity. There is also plenty of room for expansion on the site to accommodate for future growth.”

Epec Plant Manager Tommi Talasmäki, the Project Manager for ESF1 project, says that the factory project is progressing smoothly, “The project as a whole is on schedule. The windows and doors will be installed in December, so the shell will be done by Christmas and the interior work will be in full swing. We’re really looking forward to moving into our new efficient premises.”

Epec has grown rapidly in recent years. Between 2019 and 2022, the number of people has increased by almost 70%. Riikka Rajala, HR Manager at Epec, says that recruitment needs are still high, “The greatest need at the moment is for various product development and programming positions, but other specialists, assemblers and administrative staff are also needed. As we keep growing, we constantly have a lot of vacancies and a significant need for new people.”  The new factory will initially accommodate 250 employees. Provision has also already been made for the expansion of the premises. “ESF1 will provide state-of-the-art working conditions for a growing pool of talent,” concludes Rajala.