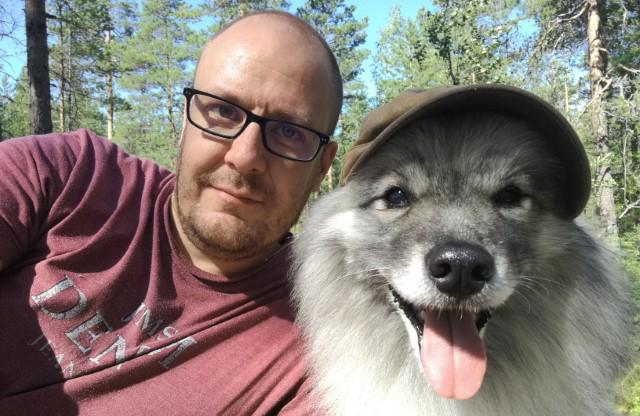 Sami is originally from Peräseinäjoki, but he moved to Vaasa to study Computer and Software Engineering at Vaasa University of Applied Sciences. At the time he also did programming for a couple of years while studying. After graduating in 2004, he sat in the engineering students’ office in Vaasa and read Ilkka. In the newspaper, Sami noticed a job announcement in which a company in Seinäjoki called Epec was looking for employees. He had no idea what the company was and where it was located, but he sent an application, got the job and that career has continued to this day.

So, in July 2004, Sami started as a software designer at the Software Engineering Department and the job was to design Timberjack software at Team Sapphire. However, because the holiday season was underway, Sami started his first week on the Ruby team because the Sapphire team was on vacation. Then the entire Ruby team went on vacation. This meant that after a not-so-comprehensive week of familiarization, Sami was left to run the show alone! He recalls being the 64th employee of Epec.

Sam’s responsibilities have changed over the years. His first year he worked as application designer on Timberjack’s projects. The next 3 years on Tamrock-Sandvik projects and then went on to customer support. He spent 8 years in customer support and at the beginning of 2017 he moved to Software Product Architecture, which is now called the SW Design team.

In his current job, Sami designs new features for software tools. The most recent work underway was a Multitool feature for a software update package. In fact, Sami spends his days by trying to think from the customer’s perspective of how things should work and making adjustments.

Epec has always had a creative team and when Sami thinks about funny incidents, he remembers Jaakko’s keyboard greenery. The Ruby team played a little practical joke on Jaakko while he was on vacation. They sowed Jaakko’s keyboard. When Jaakko returned to work, his keyboard was lush with grass. It must have been a great first day back!

Thinking of successes, Sami remembers one special project. The customer had a unit from another manufacturer on their machine and they were considering switching to an Epec 5050 unit. Sami did the preparatory work beforehand and by the time they went to the customer with Bram, they needed only a couple of days of testing, after which the unit was installed. The machine worked almost perfectly! The customer was amazed that the machine could be operational within a week. But it was and this project was an excellent demonstration of the expertise of those involved in it.

Managing new tools and developing new ones keeps Sami busy in his current job. Already during customer support, Sami made suggestions for new features, but now he can fully invest in this development. His long journey with Epec supports this work; because he is familiar with the activity and has also been on the other end as an application user, Sami can now use his experience in the development process.

When it comes to quality, he refuses to compromise! As a perfectionist Sami is never completely satisfied with the results of his work. There is always something to be improved. It can be said that high quality is something one can without fail expect from him. Compromises have to be made, but even then Sami will surely come back to make improvements later. Through his work, it can also be guaranteed that the quality of Epec’s products, if not always perfect, is at least very close.

When Sami is asked what makes it great to work at Epec for 14 years, he’s got an answer ready: the colleagues, of course! In addition to co-workers, Epec allows people to do versatile things and make extensive use of their expertise. The customer base is wide and the machines that can utilize Epec’s products are versatile.